Proceedings of the ICOM Costume Committee Annual Meeting in Toronto 2015 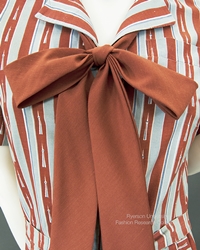 The 2015 ICOM Costume Committee annual meeting was held in Toronto, 8-13 September. It is a city with a rich dress and textile history; Toronto was a major centre of garment production in the late nineteenth and early twentieth centuries, and has been home to most of the big names in Canadian clothing retail (especially the country’s well known department stores Eaton’s, Simpsons and Holt Renfrew). In the twentieth and twenty-first centuries the city has been key in fostering the talent of many Canadian fashion designers including Dsquared2,Jeremy Laing and Smythe. Additionally, 2015 was year of celebration for Toronto; in July and August the city hosted the Pan Am and Parapan Am Games while the year saw Bata Shoe Museum celebrating its twentieth anniversary, the Royal Ontario Museum turning 101 and the newest, striking addition to Toronto’s cultural landscape, the Aga Khan Museum, reaching its first birthday.

The theme for this Costume Committee meeting was Exhibitions and Interpretation, which produced over thirty fascinating and thought-provoking papers. The topic generated much animated discussion amongst the participants who included specialists in conservation, curation, collections management, costume design, display and research.   While mornings were filled with the presentations the afternoons were given over to visits exploring exhibitions and collections across Toronto, including the Royal Ontario Museum, Bata Shoe Museum, Aga Khan Museum, Textile Museum of Canada, Toronto Reference Library and the Canadian Opera Company, as well as a visit to the Fashion History Museum in Cambridge.  The evening programme included a magnificent opening reception at the Bata Shoe Museum, a reception at the Royal Ontario Museum, a special screening and discussion of the 1948 Pressburger and Powell film The Red Shoes, a visit to designers Comrags and a food crawl in the Queen Street West neighbourhood.

The main meeting followed by a post conference tour to Montreal and Ottawa, with a day at the McCord Museum, and time at the National Gallery of Canada, the Canadian Museum of History and the Canadian Conservation Institute. The day before the conference the Committee’s fifth Student Saturday was held at Ryerson University, with the opportunity for attendees to see the Ryerson Fashion Research Collection.

The organizing committee was very grateful to all our colleagues in Toronto, Montreal and Ottawa for helping us to organize this meeting. In particular we were pleased to be working in partnership with the Aga Khan Museum, whose crucial administrative support made the meeting possible.

As the conversation generated by the presentations demonstrated the theme of Exhibitions and Interpretation was stimulated great interest, whether looking at the practical aspects of displaying dress, such as mounting, lighting and conservation, or the interpretative concepts and constructs underpinning dress and fashion exhibitions.  Over a third of the speakers have kindly translated their verbal presentations into online articles.  As with the proceedings from other recent Costume Committee meetings these are as downloadable pdf documents, providing a valuable record of the meeting which we hope will offer a useful resource for fellow museum colleagues and professionals facing the challenges and joys of working with dress and fashion in a museum setting.

Condition as Content: Focusing on Condition in Dress
Neil Brochu

Love in Fine Fashion: A Fresh Approach to an Exhibition of Wedding Dresses
Cynthia Cooper

The Paramour’s Dresses in the Northern Gallery of Salzburg Cathedral
17.4.-1.11.2015
Dorothea Nicolai

The Reconstruction and Presentation of a French Court Dress
Johannes Pietsch

Abstracts of other presentations that are not available as an article