Proceedings of the ICOM Costume Committee Annual Meeting in Milan 2016 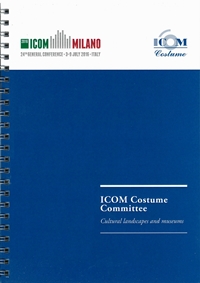 The 24th General Conference of ICOM was held in Milan from 3 to 9 July 2016 under the theme ‘Museums and Cultural Landscapes’.
The Italian landscape is world-famous. It has been described and visited in all ages. The 18th century Grand Tour became an essential destination for those seeking the best synthesis of history and natural beauty. Who does not have in mind at least one of the numberless monuments encountered while traveling through Italy, a country offering a unique stratified palimpsest of testimonies from antiquity to the Middle Ages, from the Renaissance to the Baroque, from the Neoclassical age to the present day?
Equally famous are Italy’s major museums, from the Uffizi Gallery in Florence to the Brera Gallery in Milan; from the Gallerie dell’Accademia in Venice, the Capodimonte in Naples and the Savoia Gallery in Turin to the Vatican Museums in Rome. Their masterpieces are an essential part of the “imaginary Museum” described by André Malraux, along with many other works of art which are preserved in churches, in palaces and in the towns and villages of the “Bel Paese”. Most works are displayed in art and archaeology museums, but also in sites and historic buildings that make Italy a great museo diffuso: an extended museum, an “open air museum”.
Italy’s cultural landscapes have been changing. Although endangered by urban and in-dustrial development, many of her celebrated landscapes have been preserved: although they have changed they have not been deprived of their ancient charm. New landscapes have also emerged, and their expressions of modernity have already become a part of history, while the very idea of landscape has changed and has extended to increasingly new territories appealing to the mind as well as to the eyes.
The relationship between museums and cultural landscapes is a central issue for Italy, but also a strategic perspective for the museums of the third millennium around the world. This theme presents both an opportunity and a challenge for museums to revive their mission and strengthen their cultural and social role. ICOM Italy’s theme implies two essential questions. First, to what extent should museums, especially those whose collections are linked to their locations, take the role of interpretation centre for the place and the community they belong to? Secondly, how can museums disseminate the knowledge of the cultural heritage con-served both inside and outside their walls? Thanks to the skills of their professionals, museums should become musei diffusi, extended museums and garrisons to protect the cultural heritage conserved outside their walls.
This broad conference theme offers a great variety of topics that also relate to the fields of interest of the ICOM Costume Committee.

The Making of an Exhibition – Frida Parmeggiani: textile artefacts
by Silke Geppert

Clothing as a Gateway to Understanding Canadian Landscapes
by Alexandra Kim

How Has the Miyake Issey Exhibition Influenced the Cultural Landscape of Roppongi?
by Yayoi Mothohashi

Do we still need an exhibition of Siberian clothing in the museum in the age of globalization? – About a loan of ethnographic objects from animal materials and the issue of their contaminant loads
by Christine Müller-Radloff

Wuppertal – Traces of a glorious textile past
by Dorothea Nicolai