Proceedings of the ICOM Costume Committee Annual Meeting in Kyoto 2019 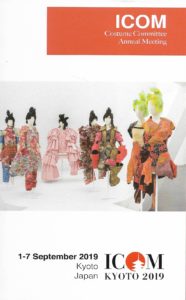 The overarching theme of the Triennial meeting, ICOM Kyoto 2019, was “The Museum as a Cultural Hub: the Future of Tradition.” The Costume Committee wishes to thank profusely our Japanese colleagues, Yayoi Motohashi, Aki Yamakawa and Makoto Ishizeki, who created an outstanding conference program. These Proceedings demonstrate the varied ways that members of the Costume Committee realized this theme through reports about their exhibitions and research. The activities and visits within the context of the meeting gave additional emphasis to the theme. The Monday afternoon sessions were held at the Kyoto International Conference Center and began with the Annual General Meeting and the installation of the new Board of Officers, followed by paper presentations. The meeting Tuesday was held at the National Museum of Modern Art Kyoto, where we welcomed Japanese colleagues not attending the ICOM meeting, and visited the Kyoto Costume Institute exhibition, “Dress Code: Are You Playing Fashion?” The Wednesday afternoon sessions were held at the Inamori Memorial Halland were held jointly with ICOMAM. The formal meeting sessions were followed by two days ofvisits. On Thursday the Committee visited the world renowned Kyoto Costume Institute for a full morning of tours and a lecture by Makoto Ishizeki. In the afternoon we visited the Chiso Corporation, established in 1555, where we saw demonstrations of Kyo Yuzen kimono painting, dying and embroidery techniques and marveled at the skill of the artisans. Friday was an all-day bus trip to Shiga Prefecture to visit the Konku Indigo Dye Studio where we experienced the processes from the growing plants to the finished product. We continued on to the Azai Noh Museum and Weaving Studio. Mr. Azai introduced us to his collection of historic Noh costumes and his inspiration to reproduce those in his collection so that current Noh performers could have the opportunity to wear such exquisite garments in performance. The museum exhibited the originals and the reproductions side by side, so that we could appreciate the exacting nature of the traditional techniques used for the reproductions.

After the conclusion of the Triennial program, Yayoi Motohashi arranged an optional postconference tour to Tokyo. Although the very beginning of the program on Sunday coincided with a typhoon, once the danger subsided, the planned lectures and visits went on the next day at Bunka Gakuen University where the group was welcomed by Professor Dr. Takagi. Presenters included Mei Mei Rado/Parson School of Design, “Tradition Refashioned: Lamé,” Saskia Tholen/Bunka Gakuen, “Kimono Re-evaluated: Mitsukoshi and the Rimpa Revival,” and Alistar O’Neill/St Martin’s London, “Exploring Fashion: Pattern Cutting.” Tours at Bunka Gakuen included the exhibition of ikat, the extensive library, and a demonstration by Sheila Cliffe of how to wear a kimono and knot an obi. Students dressed the participants as models. The next day the group visited the Shoto Museum, welcomed by the director, Dr. Takanami and Ms. Hiraiumi, the curator of the exhibition “Churashima Textiles — the Magic of Color and Patterns.” Ms. Hiraiumi spoke of the textiles made of banana fibers, and about the traditional craftmanship practiced by the Living National Treasures who continue to create these textiles. Next came fashion walks with Bunka students as tour guides and a visit to the Mitsubishi Ichigokan Museum to see the “Fortuny” exhibition. The group was welcomed by the curator, Ms. Asami, and enjoyed the exhibition which highlighted the influence of the kimono and Japanese art on Fortuny’s designs.

This brief synopsis is inadequate to express the full extent of the appreciation felt by Costume Committee members who participated in the Triennial meeting for all of the hard work it took to organize such an outstanding program.

2. How does Taiwan participate in costume international exchange by Nai-Yu Chang

3. The Politics of Fashion – Fashion and National Identity by Ildikó Simonovics

5. Pursuing Partnerships in Planning Exhibitions of East Asian Costume at an American Museum by Lee Talbot

7. A Treasure from the Deep_ The Replication and Re-interpretation of a Unique Shipwreck Textile and its Cultural Connections by Anni Shepherd, MA, PhD Student

8. The Influence of Japonism on the Parisian Fashion Journals 1860-1900 by Esther Sophia Sünderhauf

10. Fascination with Japanese fashion culture in Poland during the crisis of the late 1970s and 1980s by Joanna Regina Kowalska

13. More than Oktoberfest – The Richness of German Traditional Costume by Dr. Adelheid Rasche

16. The contribution of the Azerbaijan SSR and the banners of national divisions in the history of the victory of the Second World War (1941-1945) by Parvin Gozalov

17. Japanese Warriors’ Surcoats (Jinbaori) in the Age of Exploration by Aki Yamakawa

22. Get Dressed for the World’s Largest Party – Olympic Uniforms through the Age by Patricia Reymond – English

23. Why do we love to look like a soldier by Ilse Bogaerts

24. The Social Impact of The Military on Fashion: Uniforms and Uniformity by Paul van Brakel